Adapted from Jack Handey in The New Yorker.

Keep trying and pushing and struggling, even if you don’t know what your goal is or why you would want to achieve it.

Some will try to discourage you, pleading “In the name of God, please stop what you’re doing!” Keep going. Rest assured, they’re jealous.

“No, you haven’t struck a nerve,” they’ll say. “What you’re doing is just awful, and we’d like you to stop!”

Let that be your inspiration. Shake off the naysayers and trudge on, through the mud and the filth and the slime, knowing that you have a higher purpose. Remember, nobody liked van Gogh’s work, and if nobody likes yours, it’s probably a sign that you’re a genius.

Fend off the monkeys of “good manners” and the sloths of “patience.”

We are born with the instinct not to give up. As babies, we cry and scream until we get what we want. But somewhere along the line we lose that ability. People talk us out of our crazy ideas—people who live in the so-called real world, where things “make sense.” They’ve never attempted the impossible. But you have, many, many times.

Eventually, all your determination will pay off. The same people who mocked your ideas and tackled you will now claim to love your vision. “We love it! We love it!” they’ll say. They’ll tell you that the governor is interested in your ideas and will bundle you off in a car to the governor’s mansion. But when you pass under the stone archway you’ll notice that it doesn’t say “Governor’s Mansion” but “Insane Asylum.” Jump out of the car and run into the woods. Keep running. Never give up running. 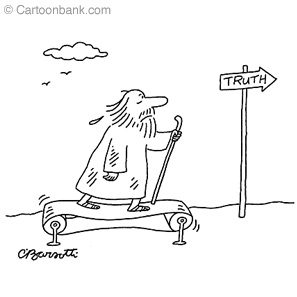 And lastly, always remember that the fact that nobody you know has the slightest interest in your blog is the strongest possible evidence that everyone you don’t know is yearning for its insights.